A Conversation with George Oates Conference chair Erin Malone talks with George Oates about her recent work [Re]Connecting with the Flickr Commons program she created back in 2008 and the creation of the Flickr Foundation, a new nonprofit whose basic purpose is to make sure Flickr can’t be deleted. 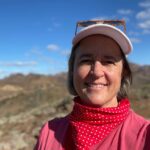 George Oates is a designer working at the intersection of software, cultural heritage, and philosophy. She is the founder of the Flickr Foundation, a 501(c)(3) charity dedicated to the challenge of preventing Flickr from being deleted.

George has worked online since 1996 and enjoyed a great variety of interesting roles like being part of the small team that created Flickr, project lead of Open Library at Internet Archive, and director of design at Stamen Design. George specialises in designing systems used by millions of people holding billions of things but also likes designing very specific interfaces for tiny audiences.