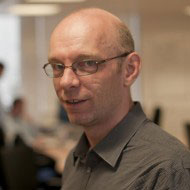 Mark Plant stumbled across the Internet in 1993 and was intrigued by photos of this clicky web thing. After a stint in the late 90s where he was building internal sites for an investment bank (idea to code), he made the break into advertising. There he settled into a sequence of roles at WCJ/Impiric/Wunderman as a developer/IA/functional designer.

He left advertising in 2009 and returned to investment banking to set up a User Experience practice within Lab49. Whilst he prefers to think of his role as an “Architect of Interaction and Information”, he has settled for “User Experience” as less confusing.