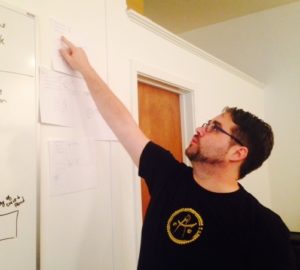 His original career path was architecture and he’s still interested in it, especially how we re-interpret built spaces. A keen observer of humans, he’s fascinated by how they self-organise.

David attended the second IA Summit in 2001. He returned to the conference in 2014 when he joined Aviva Rosenstein, Donna Lichaw, Eduardo Ortiz, and Erik Gibb on the “Designing for Villains” panel. He was back at the Summit in 2015 and 2016. Helping out with the conference this year is his way of giving back to the event that helped launch his company.