First up in our ‘meet the team’ series of posts we introduce one of our co-chairs – Noreen Whysel.

We’ve asked the same few questions to all the team working on the conference, starting with…

Where do you work and what do you do?

I am an independent IA/UX researcher and entrepreneur. I have been working on projects in trusted online identity, supercomputing gateways for scientific researchers and personal finance tools that employ behavioral economics.

What’s been your favourite moment as an IA (so far)?

Many people in this community know me from my days as the operations manager for the IA Institute from 2005 to 2014. My favorite moment was my first IA Summit in Las Vegas in 2007, meeting a lot of people whose books I’ve read and discovering they are all so friendly, welcoming and approachable. I met people like Austin Govella and Wolf Nöding, whom I had been working on projects in cyberspace for years. Instant friends that I had never seen face to face. That really helped me get acclimated to a conference where I thought I wouldn’t know anyone.

What made you decide to volunteer for IAC?

Since Las Vegas, there was only one year in 2015 when I didn’t volunteer. I’ve manned the IAI table and ran the “IA is In” mentoring booth for many years. I love this community. Of course I said “Yes,” when offered the chance to Co-Chair!

What does the theme mean to you – what are you hoping to see, hear, sense or share in New Orleans?

One thing one notices when coming to New Orleans for the first time is the sound, light and heat of the city. It’s very different from anywhere I’ve been in the US, even coming from New York City. Everything is brighter. The music has a brightness to it, the food really pops. It’s almost a synesthetic experience. And of course, like Jazz, everything has a story to tell with an interesting perspective that builds something new out of something that’s been with us forever. I’m hoping folks will take inspiration from these experiences and tell their stories of on our stage.

Where can people find you?

If you are ever in New York City look me up. I tweet at @nwhysel write at Whysel.com and Instagram at @noreenwhysel. 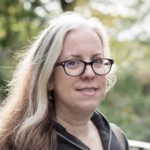 Noreen Whysel is a NYC-based IA/UX Researcher. Her first IA project was tagging buttons in a database at Chanel in 1990. She began her actual UX career in the late 1990s after seven years in real estate research at Price Waterhouse. She joined the PWC merger team as a WebOps Manager and was there for four years before starting an IA/Research consulting business, working on projects as diverse as bird taxonomies and identity ecosystems. She was the Operations Manager at the Information Architecture Institute for ten years and held a similar role at the OWASP Foundation. She is a Co-Founder and COO of Decision Fish, leads product integrity research at the Me2B Alliance and hosts the Behavioral Economics NYC meet-up. She is a coordinating member of UX Camp 2021, a board member of GISMOnyc, and a member of working groups developing trusted identity standards and ethical frameworks. She has a BA in Psychology from Columbia and a MSLIS from Pratt Institute.

Noreen has attended this conference since 2007 in Las Vegas and has only missed two since then. She was a Co-Chair at IAC20 and Experience Director at IAC19. She gave talks on IA and Emergency Management in 2013, IA and Wikipedia in 2016 and Trust and Vulnerable Populations in 2019. She has presented at poster night five times and is a frequent speaker mentor.