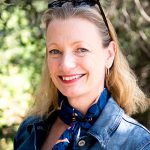 Human beings have long dreamt of mechanical beings with reflective consciousness. Dreams moved closer to reality moved after World War II, with significant advances in computing power and the emergence of Artificial Intelligence (AI), defined by pioneer John McCarthy as “the science and engineering of making intelligent machines”.

“In this talk, following the theme of the summit–Designing for Humans–I will focus on the nature of “human” and “humanity”, and consider the different conceptions of those terms in the evolving agenda of contemporary AI by reference to two sister areas of investigation: augmented intelligence” (also called “intelligence amplification”), and “ambient intelligence”. I will reflect on examples from my own work, and consider the potential impact on information architecture as a discipline and field of expertise.”

Dr. Elizabeth Churchill is a Director of User Experience at Google. Elizabeth’s field of study is Human Computer Interaction, and her current focus is on the design and development of connected devices and of developer tools for device ecosystems. Elizabeth has built research groups and led research in a number of well known companies, including eBay Research Labs, Yahoo!, and PARC.

A Distinguished Scientist and Distinguished Speaker of the Association for Computing Machinery (ACM) and a member of the Special Interest Group on Computer-Human Interaction Academy, Elizabeth has worked in a number of research areas and has been successful at publishing, prototyping and patenting. She has more than 50 patents granted or pending, and over 100 publications in theoretical and applied psychology, cognitive science, human-computer interaction, mobile and ubiquitous computing, computer mediated communication and social media, and has co-authored or co-edited 6 books.

What we tweeted about